Thinning shears, chucking scissors or texturizing shears are a specialized group of beauty shears for cutting hair. They are used to reduce the volume of the hair and create a texture or a shaded effect. Unlike normal shears, these shears have teeth on the edge of the rotating blade, similar to those seen in a comb. 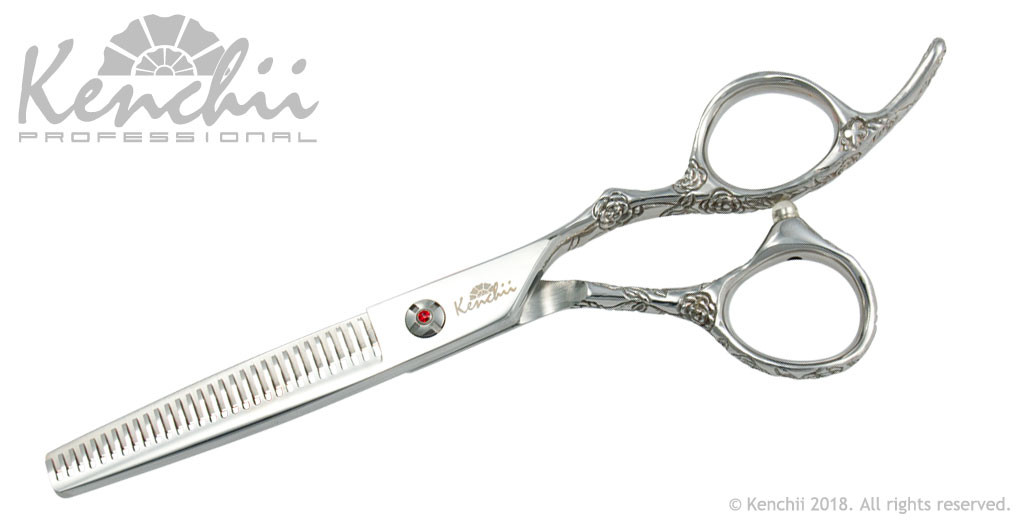 The shears for mixing and texturing are very versatile and with different tooth configurations, you can cut between 40 and 70% of a client's hair with only one or two cuts.

Thin shears of this type can add a more natural mix to any haircut or add a level of consistency to improve the overall taste of your masterpiece.

So, these teeth are not just for smiling, these teeth work wonders for people's hair, however, how many teeth and why? If you have been on our site for a while, you would have seen the thinning shears with all the variations in the amount of teeth.

As a general rule, 25 and more should be textured and mixed, while 15 and less are stain removers.

When handling thick hair, fewer teeth with larger spaces make the job much easier. The stain removers are the best for curly hair, with which they fight the normal scissors, since their name indicates that these scissors can simultaneously remove large pieces of hair (~ 40 - 80%).

However, an important warning, hair thinning scissors can be difficult to use and if used incorrectly can leave holes in the cut.

Now that we are done with the sharpness of thinning shears, let's move on to how to use them.

Learn more about how to use thinning shears.

Although this is not rocket science, it is important to brush / comb the hair until it is untangled and smooth. In addition, it is better to use scissors to thin dry hair, since wet hair tends to stick, which reduces consistency than removing any hair. If the hair you are working on is naturally curly, try straightening it before using shears for texturing.

With shears in hand, separate the blade and place a small portion of hair between the teeth and the blade. Make sure your scissors are about three inches above the surface of the scalp and your fingers! Never use scissors on a client's roots or hair tips.

Once the hair is in neutral between the scattered shears, the edge is excellent, keep the shears tilted 45 degrees and make small cuts at all ends to remove some of the extra mass. Remember to comb your trimmed hair to make sure it is not removed too much.

Furthermore, if your goal is to eliminate the overall thickness of your client's hair, rather than just a more "piecier" look, place your cutting edge around your client's central hair section and alternate by acting on the hair shaft.

Again, remember to comb the remaining hair and you're done.